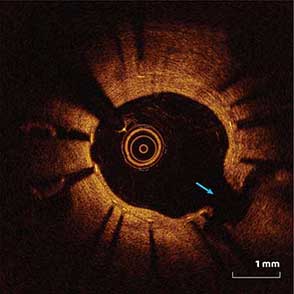 In-Stent Restenosis with Jailed Side Branch

A 67-year-old man with multiple prior MIs and PCIs presented with weeks-long worsening exertional dyspnea and occasional chest pain at rest relieved with nitroglycerine. 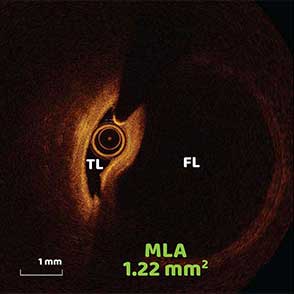 40-year-old female underwent PCI two months prior, one month post partum, due to chest pain and SOB. SCAD was detected and treated with two stents placed in the LM and mLAD. 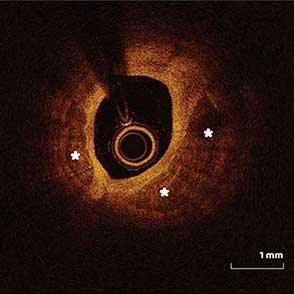 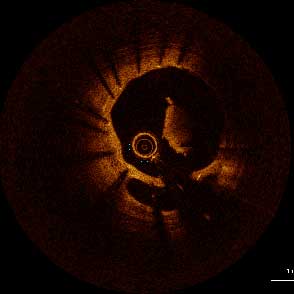 A 48-year-old male ex-smoker with a history of hyperlipidemia presented with NSTEMI. Patient had a prior PCI to the mid LAD two years prior the event in an outside hospital. Coronary angiography before PCI showed a hazy lesion in the proximal LAD, which was further examined using OCT.

A 75-year-old patient with multiple previous PCIs including 2 second generation DES to the RCA, presented for elective PCI for the recurrent ISR. Coronary angiogram showed a 70-80% stenosis in both proximal and mid segment of the RCA; underexpansion of the stent implanted into the mid RCA was suspected based on angiography. 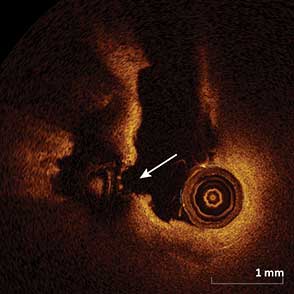 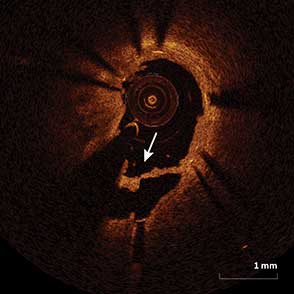 A 49-year-old female with controlled hypertension and hyperlipidemia, uncontrolled DM, multiple prior PCI, and recent NSTEMI had a PCI with a 2.5x12mm DES to the proximal LCX.

OCT Guidance in Bifurcation PCI of Proximal LCx and LAD

A 65-year-old male, with a history of hyperlipidemia and prior PCI to RCA and LAD, presented with NSTEMI. Coronary angiography revealed three vessel disease and the patient underwent successful intervention of culprit RCA lesion with rotational atherectomy and DES implantation.

A 71-year-old male, smoker with a history of hypertension, hyperlipidemia and asthma presented to our hospital with angina pectoris. Coronary CTA showed 2 vessel disease and angiography confirmed LAD and RCA lesions. 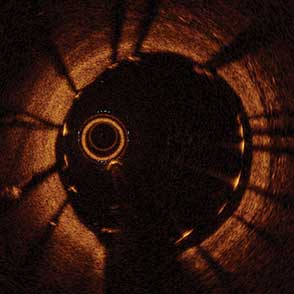 A 75-year-old female with a history of MI hypertension, dyslipidemia, tobacco use and hypothyroidism presented with progressively worsening dyspnea on exertion and chest pain over the past 2-3 weeks. Coronary angiogram revealed a moderate to severely calcified lesion in the proximal and mid LDA and mild diffuse disease in the D1. 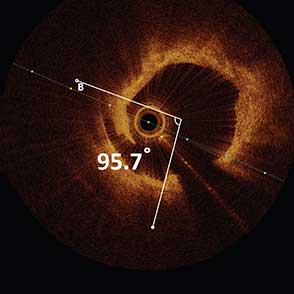 A 71-year-old male, non-smoker with hypertension, hyperlipidemia and the history of chronic heart failure presented with angina pectoris. Coronary angiography revealed 3 vessel disease, and the patient and his family opted for PCI. The patient was referred to our hospital for a PCI of heavily calcified LM-LAD lesion.

A 71-year-old female with hypertension, hyperlipidemia, and a history of smoking had angina pectoris and was referred to our hospital. Stress MPI showed mild inferoapical ischemia and coronary angiography revealed heavily calcified RCA lesion. 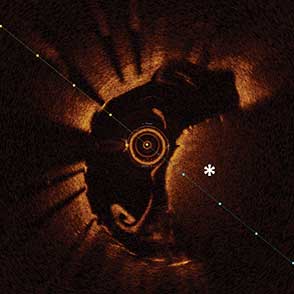 A 66-year-old male, a smoker with a history of hyperlipidemia, prior MI and chronic systolic heart failure (NYHA Class III) presented for a staged PCI of the RCA. Prior PCI of the proximal LAD was performed 7 weeks earlier in the setting of NSTEMI with culprit lesion in the proximal LAD treated with a 4X38 mm drug-eluting stent. 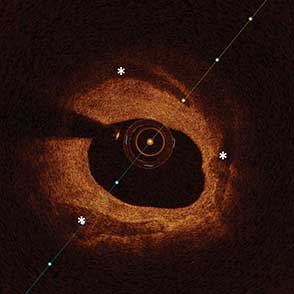 A 58-year-old male, who presented with unstable angina and underwent PCI of acutely occluded RCA three weeks earlier, now presents for a staged PCI of the LM and LAD. Coronary angiography before PCI showed a 50-60% stenosis of the distal LM and 80-90% bifurcation lesion in the LAD with 30-50% stenosis in the D2 branch. 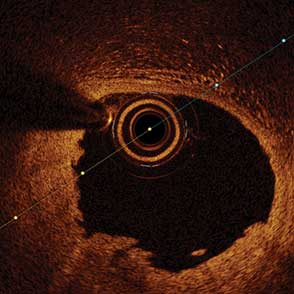 A 59-year-old male with no medical history arrived at emergency department due to sudden onset of chest pain radiating to back and shoulder. The ECG showed ST-elevation in leads V2-3 and an emergent coronary angiography revealed a total occlusion of the mid LAD.

Reach out to us with general comments or questions.
connect now
We use cookies to ensure that we give you the best experience on our website. If you continue to use this site we will assume that you are happy with it.OKNoPrivacy Policy