Guidewires were initially invented and used by Dotter and Judkins to cross a disease segment of the artery for further intervention. However, the initial wire used for coronary intervention was a spring coil guidewire over which a series of large rigid dilators were advanced.

Andreas Grüentzig replaced these dilators with inflatable balloons, which were introduced percutaneously, hence pioneering the era of percutaneous coronary angioplasty. After Grüentzig pioneered the first angioplasty, a group of cardiologists met and formed a registry under The National Heart, Lung, and Blood Institute. Since then, significant improvement in different types of equipment and techniques were made.

The original dilatation catheter with a short tip of guidewire could not be modified once the catheter was introduced, providing the operator with no control to maneuver the catheter/wire inside the vessel. In 1981, Dr. Simpson developed a new catheter system with an independently steerable guidewire located in the balloon catheter’s central lumen, replacing the short fixed non-steerable wire tip (5 mm) manufactured by Andreas Grüntzig.1 The introduction of the coaxial steerable guidewire was the first revolution in the history of coronary angioplasty.

Compared to the early version of guidewires, modern guidewires are designed to combine tip softness, trackability around curves, and precise torque control, which allow the guidewire to be steered through tortuous vessels and side branches.

The first step to understanding how to use a guidewire is to know the engineering aspects of wire technology, core material, and how different components change the wire’s characteristics. Guidewires are comprised of mainly four features: core, tip, body, and coating. The small variations in these components have drastic impacts on guidewire characteristics and their intended application. The areas that differentiate over a hundred guidewire are mainly due to various compositions at the wire’s distal end. 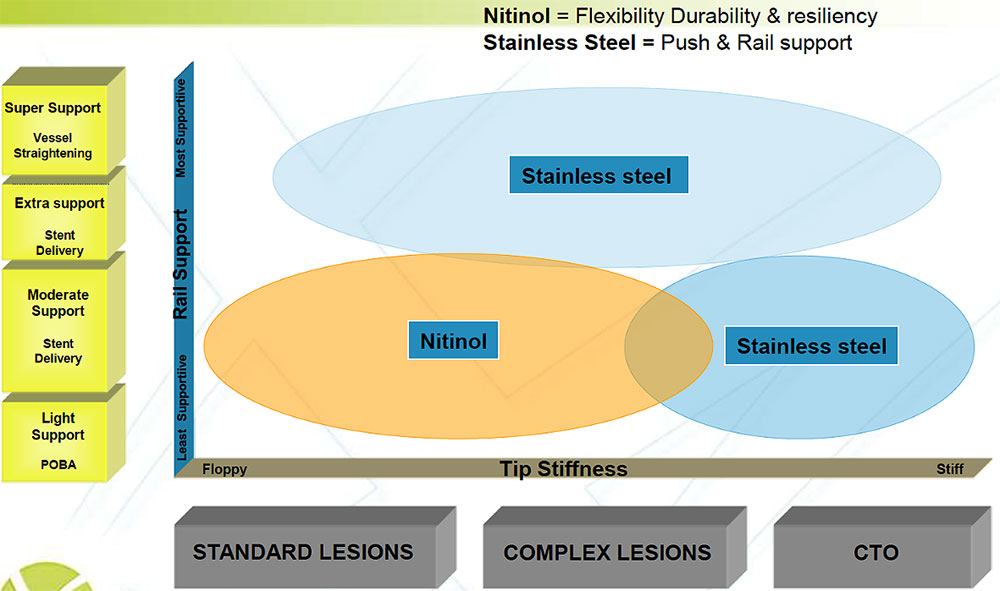 Inner coil technology is composed of a stainless steel inner coil affixed directly to the distal portion of the stainless steel core enhances the shape retention and durability of the distal tip, reduces whipping, and provides exceptional torquability.

Hybrid wires, sometimes called sleeved wires, consists of a polymer cover on the body while leaving the distal spring coils at the tip uncovered. 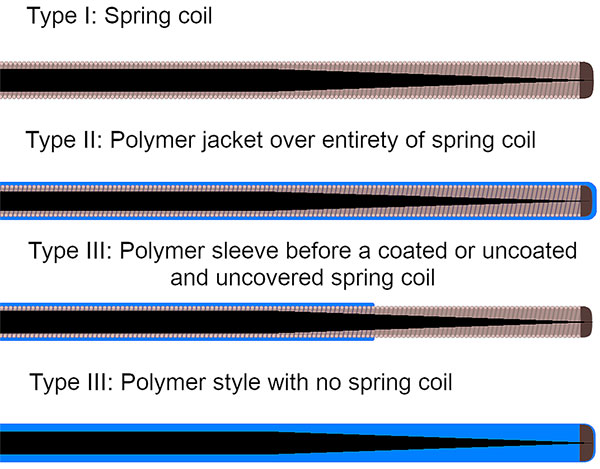 Various Guidewire Construction based on different form of coils and Covers 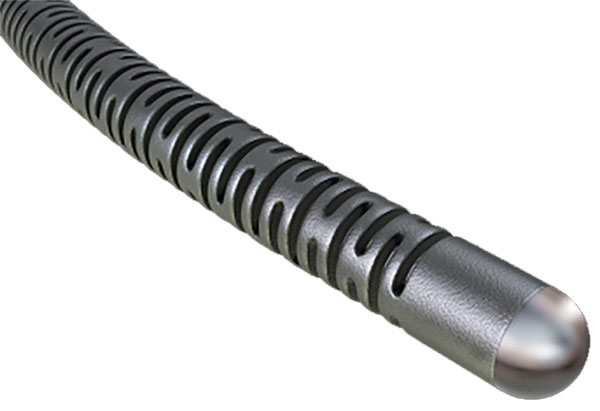 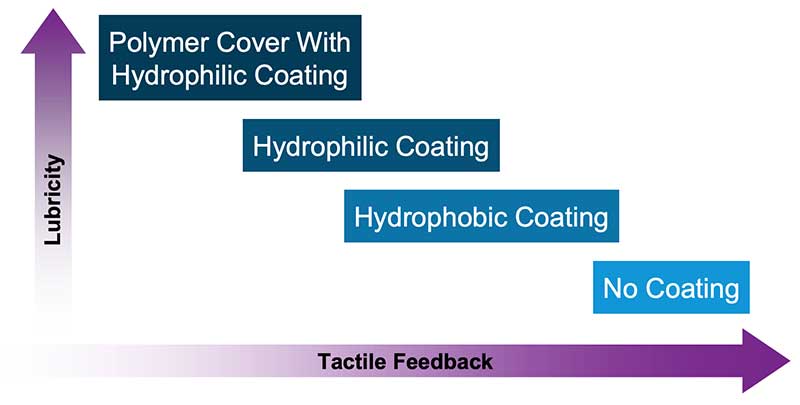 Coil Length: The spring coil length can vary significantly from as low as 2.2cm upwards to 30cm. Generally, shorter coils are found on devices intended for high support and longer coils on trackability and flexibility devices.

Radiopaque length: The distal tip, an opaque part under x-rays, is usually about 30mm in length except for specialized CTO wires. It helps to make a measurement of the diseased segment and makes it easier to locate the wire. Some specialty wires have multiple radiopaque segments, such as the Medtronic Zinger Marker and Boston Scientific Forte Support Marker for more accurate measurements.

Wire Characteristics
Small changes in wire design can have a large impact on the overall clinical performance. Thus, appropriate wire selection heavily depends on the understanding of the various wire properties. The following terminologies are often used to describe various guidewire characteristics.

Trackability or deliverability or crossing: It is an ability to follow the tip and advance smoothly along the vessel through stenosis or occlusion. Trackability is improved by nitinol core material and longer taper length, hydrophilic coatings, and polymer sleeves. Below, an Asahi Sion Black and conventional guidewire are advanced into an artificial vessel. Additionally, a comparison of guidewire surface roughness in a jacketed wire vs. spring coil wire is illustrated.

* There are various ways to measure the tip load depending on the manufacturer. The method shown here is used by Abbott. 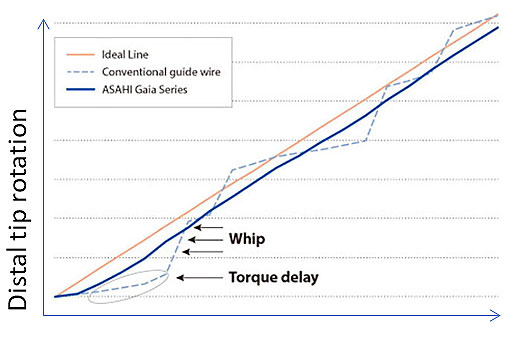 Characteristics and Functionality of the Guidewires

Knowing the properties of guidewire and the specifics of the different types are crucial in selecting appropriate guidewire. However, it is strongly recommended to choose and master only a few wires instead of having superficial knowledge about multiple wires.

The majority of guidewires are straight tipped and can be modified/shaped according to the vessel contour. The tip can be shaped with either the introducer needle or the shaping needle that comes along with the wire. Usually, a simple J shaped curve at the wire’s distal end will help track the wire through the vessel. The wire should be advanced gently through the stenosed segment. Forceful pushing of the wire can result in plaque disruption, leading to acute thrombus formation and occlusion of the vessel. It is recommended that 180-degree clockwise or counterclockwise rotations of the wire should be performed during advancement in order to avoid wire advancement into smaller branches.5 However, 360-degree rotations should be avoided, particularly when a second wire is required to prevent entanglement.

The wire tip should be placed as distal as possible, so the wire’s stiff part is across the lesion, providing adequate support to advance interventional devices.

The left anterior oblique (LAO) caudal view is the best initial view to wire the LAD. Once the wire position is confirmed in the proximal LAD, further advancement into the mid and distal LAD should be carried out in the right anterior oblique (RAO) cranial view.

A broader tip helps with entry into the LCx, and a smaller curve supports advancement into the Obtuse marginal (OM).

If the RCA’s origin is relatively normal, a conventional soft wire with good steerability to avoid side branches is chosen first. 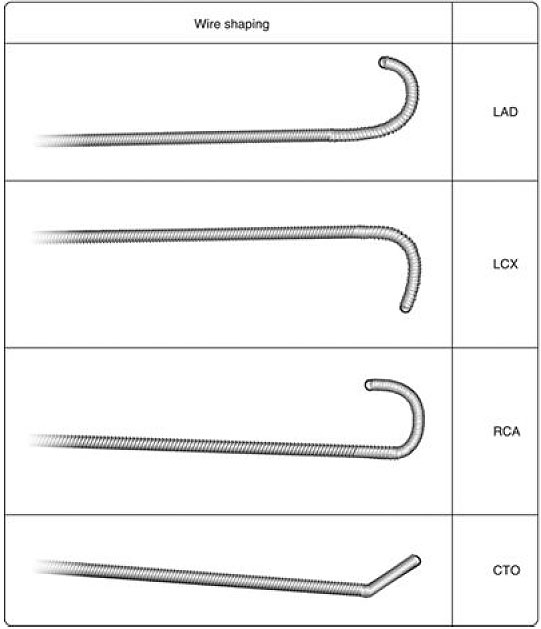 There is no single guidewire that can be universally used in all CTO lesions and all possible circumstances. Familiarity with various CTO guidewires, proper selection based on angiographic features, and proper wiring techniques are necessary for CTO PCI success. 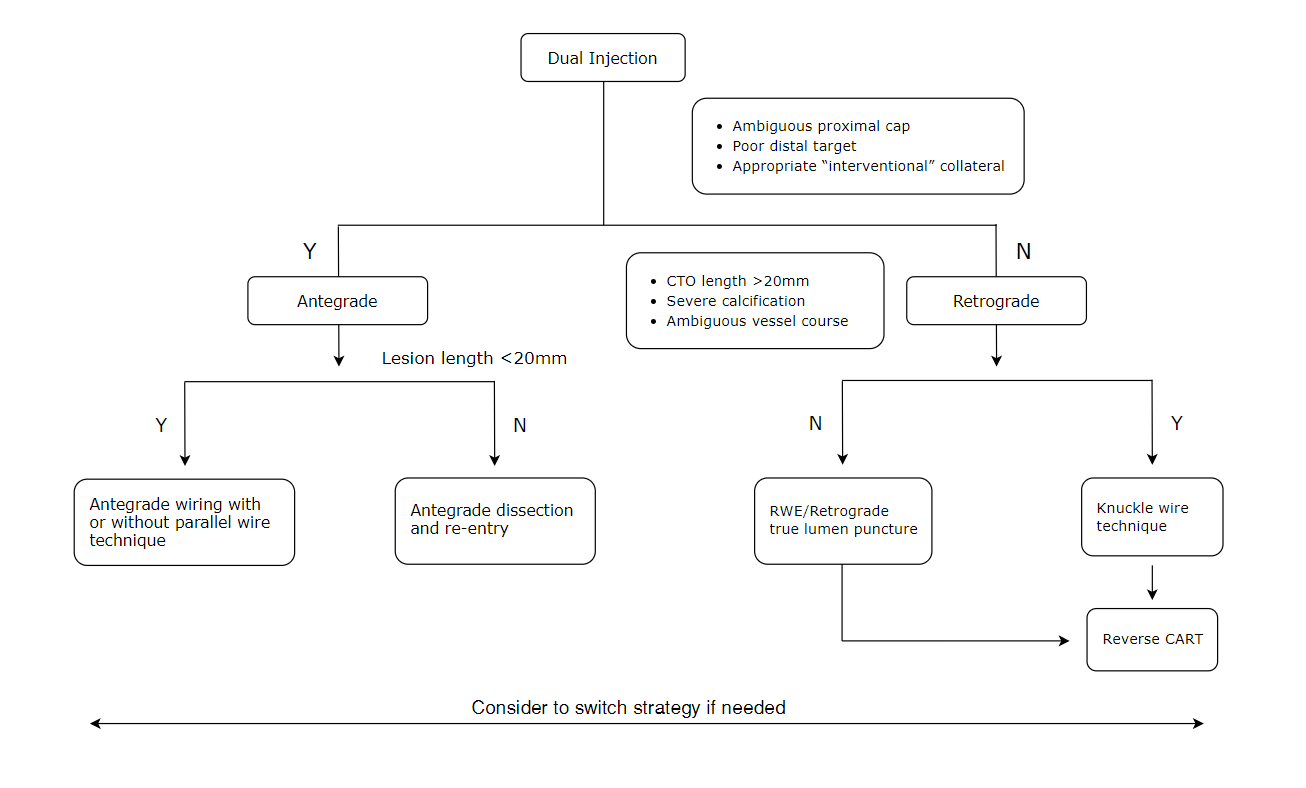 Essential features to consider when selecting a guidewire include 1) tapered tip or not; 2) tip load and stiffness; 3) coated or non-coated polymer; 4) trackability.

Although multiple guidewires can be used in the CTO intervention, the principle on how to choose the wire is mostly unchanged.

If the vessel course is ambiguous:

Wire selection based on the location

Choice of CTO wires based on angiographic features8

Navigating through the vessel:

Distal entry into the lumen:

The operator’s ability to manipulate the wire is even more crucial in the retrograde or antegrade-retrograde CTO approach. Steering the guidewire through collateral channels to reach the CTO’s distal end and re-entering the other side of the true lumen is challenging for the operator. This category’s primary requirement is that the wire should be longer, with the lowest tip load and very low friction, hydrophilic/polymer jacket coating.

The following are the most used wires for a specific purpose:

Orbital atherectomy is performed over a 0.014” guidewire, in contrast to a 0.009” wire with rotational atherectomy.

Microcatheter and over-the-wire balloons are low profile and trackable systems with end-holes. It provides good wire support and allows precise wire control by preventing flexion, kinking, and prolapse of the guidewire, especially in complex coronary intervention. It is useful in navigating tortuous or angulated lesion, CTO lesion, complex bifurcation with or without acute angle side branch, and recrossing a jailed side branch. Hence, microcatheter and guidewire are used as a single unit (e.g., Fielder + FineCross) to navigate challenging anatomy in complex coronary intervention.